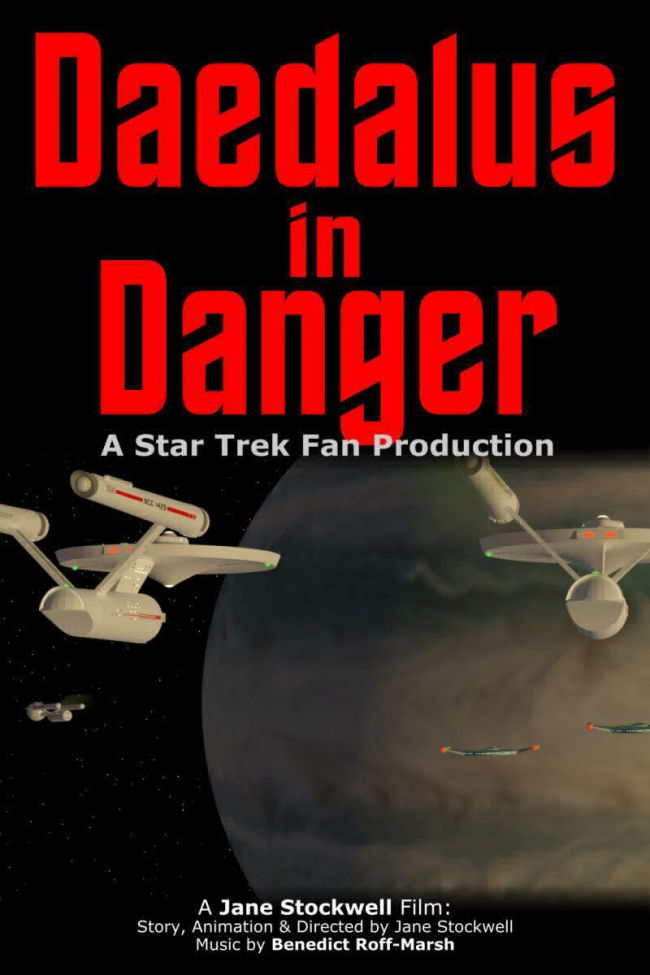 “Daedalus in Danger” is a fan-made short film that tries to capture the adventure of the original series of Star Trek. I always wanted to see the Constitution-class ships fighting side-by-side. It didn’t happen that way in the series, so I made my own.

The USS Daedalus, a Federation research vessel carrying a Vulcan research team is under attack! Starfleet dispatches its Constitution-class heavy cruisers to defend her.
This is my very first attempt at creating a story in film. It all started when I wanted to learn how to create 3D models, and me being the Trekkie that I am, I chose the USS Enterprise from the 1960s series. I deliberately made my models faithful to the original series, although many models you see tend to have made them far more detailed. That wasn’t my intent, I wanted it to feel like the original series.
Originally, I planned to wrap the whole story around the USS Woomera, a Constitution-class vessel that conveniently is exactly the same design as the well-known USS Enterprise.
After creating the hero, I needed an antagonist. Again dipping into history, I chose the Romulan Bird of Prey, an incredibly simple yet sinister enemy. Drawing the bird for the underside of the hull in Inkscape was an exercise and a half, but I was very pleased with how it turned out.
Last, but not least, we needed a victim to be attacked by the Romulans. I chose the USS Daedalus, a ship design pitched in the series as an older research vessel. It had some detail with the ridges along the sides and the big-ball main hull that took some effort to create the textures around.
With the elements in place and with Benedict’s assistance, we put all the pieces into place to create the film. It took some weeks to do, even for a two and a half minute movie, but the results were far better than I could have hoped for. Benedict’s work on the score and sound effects made a huge difference, as well as his input along the way with flow and continuity.
Being an existing universe beloning to another production company we had to be very respectful for thier rules & permissions. Thankfully CBS Paramount are very kind in publishing a clear set of permissions & criteria for fan films which we could follow with comfort that we were honoring all those who had boldly gone before us.
Unigon Plane completed Projects

Made with Mobirise web templates