This record has been a labor of love for the two musicians involved for the best part of 20 years. They ended up trying a Kickstarter campaign to see if they could get the money to record and be done with it. It worked so here is the album.

One of the problems that the guys faced in getting this record made was that they felt that there was a complete lack of understanding of their music when they tried to play tracks live (which they admit was only twice). This I fully understand as audiences post-Rap/Grunge/Techno have become very hard to reach with anything that isn’t immediately the same. Silence from audiences is un-nerving.

What first grabbed me about Language of Prairie Dogs was that they sang properly. Oddly at times but properly. Sad to say again and again (as I feel I have to) but natural singing has become almost a novelty these days. Perhaps the boys were right and audiences couldn’t manage to connect to non-faux singing.

The first track I heard, “Railway Manias” immediately made sense to me as being in the tradition of British Blue-Eyed Soul of the late 80’s and early 90’s. I was thinking Deacon Blue’s “Raintown” or Marillion’s “Season’s End”. Still all clearly Soul with a greater story than I love you.

Story this record definitely has as it is a concept album based on the Tower of Babel story.

Some songs are mighty odd – or comical – I’ll let you decide. “Jack” seems to be about a guy having misplaced his Jack who one must assume is Mr. Daniels. There is another titled “Remember The Teletubbies”! These songs, in particular, give the album some sense of being a sort of Rock Opera like Rick Wakeman’s “1984”. Thankfully it never comes off as a joke record.

Past that I must say I am lost as I have not managed to clarify the storyline even after quite a few listens. That’s something I feel I’d like to understand better as it would probably help me get into the record even better. Perhaps some liner notes – or a least a website page with the story overview and a song by song? 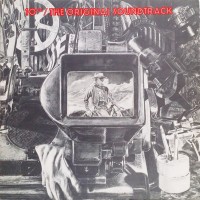 Musically this record could almost be Progressive Rock as while the instrumentation is reasonably traditional with Drums, Bass, Guitars, and Synths, the musical lines aren’t exactly Rock Riffing. Couple that with lyrics that don’t seem to have choruses but read more like kooky prose and it sure ain’t no Spice Girls record. If you have 10CC’s “The Original Soundtrack” then you probably have the closest parallel – without “I’m Not In Love” which is a shame as the record doesn’t really have an obvious radio single.

Which is perhaps moot seeing there is no radio to speak of any more to present quality work and give it enough spins (exposure) to get it understood and into people’s heads. This leaves sites like this one to hope people give a record enough time to become interested enough to buy a copy to get to know the whole piece of work better themselves.

Raising the money to go into a studio was worth it as the record sounds really good. Really polished overall which is necessary as I don’t think it would have worked as well if this was a scruffy record.

Will you like this record? I don’t know but hopefully, you are listening to the embed above. I would really like to hear more from these guys as this record is really good work by any standards. Perhaps if they get enough encouragement from real music fans who appreciate this artwork then they just may…

Submit your book or album for review on Unigon Plane

Thanks, Travis! Of course, for the kids to learn, they’d have to actually listen to us first! 🙂

Yes, it is difficult to visualise that everything we see is made up of tiny atoms that actually have space between them. Granted, it’s not a lot of space, but it’s still there!

As you know other vids of mine have animations/movement but while I tried it here at first, I wasn’t feeling it. Yes we are all action-starved (as a result of overstimulation) but I can only do what I can do. I am more interested in finishing a project then getting bogged down.

General audiences are all so demanding that unless…[Read more]

Benedict your art skills are great and certainly good enough for your videos. Like I mentioned on Youtube it feels like there needs to be a bit more happening, more movement or text or even your images scrolling across the screen. What a shame there are no great shortcuts to animating, still a very tedious, drawn out process. Excellent opportunity…[Read more]

Wow Jane you really know your stuff, together with Benedict I’m sure your kids must benefit greatly from all that wisdom!

It’s hard to wrap my head around the idea of things being made from atoms but to consider those atoms packed tight together in their attracting and repulsing states keeping them stable to form a solid makes some sense.